What blend did your grandfather smoke?

#1
I'm always interested to hear what blend/blends everyone's dad or grandfather smoked, and stories about them and their pipes. Of course this can include anyone who inspired you to be a pipe smoker as well. My grandfather was more of a cigarette smoker but loved rolling Prince Albert. Once I was around my mother smoking PA and she instantly recognized it from the room note. I had no idea until then what he smoked.

Not a daisy at all

Sales
Patron
Old Ted Award Winner
#2
Mine was a Prince Albert smoker as well. My dad said that granny would occasionally buy him something else as a treat, but he always had a red can around.

PSD Slow Smoke Winner
#3
My great uncle Robert was an avid pipe smoker. Although I haven't got to see his stash yet, I have a few pictures of him with his pipe, and in one (taken in the 80's) he has a bag of Half & Half. However, his wife, my great Aunt Mary, said that he used to take trips to Peretti's and she told me that he'd always come home with tobacco she remembers smelling "...so much better than that lousy s** he'd buy at the corner store". That sure gave me a laugh. I'm hoping I can take a trip to visit her someday and hopefully come home with one of Uncle Robert's pipes!

Thought he was passing through, but stayed.

This is all I remember.

Father's father: I suspect "Granger" from all the nail cans in his shop. This was his pipe:

My father smoked various aromatics in this (and others):

#6
My Great Uncle was the only Pipe Smoker that I remember, he smoked Condor Long Cut.

#7
My Dad and Grandfathers didn't smoke a pipe. My Great Uncle did. He smoked the OTC 'codger' brands tht were available at the drug store or the grocery store back then. Prince Albert, Half & Half, Captain Black, etc.

Only in the '70's did he start trying out other brands that became available after the first large scale shopping mall opened near here that featured a Tinder Box tobacco store. I don't know what he bought from the Tinder Box as it was bulk in plastic bags and I wasn't into pipes when I was a kid.

I know he smoked the old codger brands earlier though because he had the cans and tobacco tins all over his machine shop holding screws, and other bits of hardware.

#8
My grandfather smoked Sir Walter Raleigh Aromatic in mostly Dr. Grabow and various other drug store pipes.
Smoked Pall Mall and Kent cigarettes as well. On some occasions, he liked Muriel Coronas late in the evening.

He was also a chewer. Liked Red Man, Levi Garrett and such while doing chores around the house. Sometimes he dipped Scotch snuff. Red Seal, Honey Bee and Bruton on occasions.

He was a frugal man, having been raised during the Depression and all. Served his country overseas as a tail gunner on a B-26. He survived 34 missions, came home, and went to work at the local mill. Married his high school sweetheart and raised a family. He was always more a father to me than a grandfather, and I miss him almost every day.
I still have a few of his old pipes and snuff tins. Treasures indeed.
Here’s a pic of him while stationed in France.

#9
Only my great-uncle smoked a pipe and his tobacco of choice was Half and Half. I remember being very confused as a youngin cuz that’s also what my folks put in their coffee. 😆 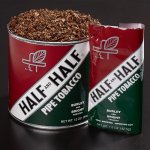 #10
Mine smoked Sir Walter Raleigh. I still have some of the old tins he kept after he passed.

My great uncle was the only pipe smoker that I am aware of and their home always smelled of an aromatic of some sort, most likely a cherry.

#12
Dad's dad smoked cigarettes, I think.
Mom's dad smoked a few different things, but there are several of Three Nuns tins at the cottage that he used to hold nails and other little bits for his toolbox. I think that was his main blend. And he smoked mostly Brigham pipes.

Patron
#13
Grampa never smoked while I was alive. When I was bitty he chewed twist and always had package of it poking out of his overall pocket. Later on it was skoal key.
My mom's stepfather smoked a cherry blend that I haven't been able to place as she doesn't remember what it was. I'm thinking maybe it was Middleton's.

#15
My grandfathers didn't smoke but I had a great uncle who rolled his own cigarettes with PA and my father's best friend smoked SWR.

#16
I wish I knew what my paternal grandfather smoked. I also wish I had a pipe of his. I do remember that he had a nice chair-side table that opened up and had pipe racks in the doors and space inside for tobacco. Had an ashtray with a knocker on top.

#17
According to my Dad, my grandfather smoked a mix that his tobacco shop made up for him. Apparently he continued to order it from them when he moved. I think it was part cherry aromatic with some non aromatic.
S

#18
In the late 50's and early 60's my father smoked Kentucky Club, some Cookie Jar and Mixture #79. All of those blends were available over the counter. On a rare occasion he might venture into a B&M. He smoked only briars, never touched a corn cob pipe. Things were was different then.
Last edited: Nov 28, 2019

Patron
#19
My paternal grandfather was a pipe smoker. All OTC as far as I can remember, and it would have been quite a journey to a tobacco shop. SWR, PA, H&H, and Kentucky Club are four I remember from the cans/pouches. My dad pretty much smoked the same, although he branched out into cheap cigars. I don't remember much about their pipes; I'm sure Grabows or Kaywoodie. I have vague memories of granddad having some sort of metal pipe, which would have been his style; he was a gadget guy.

#20
Never saw either grandfathers smoke anything besides cigarettes if even that, dad had 2 Grabow's(bulldog and a omega) never saw him smoke either one, never had any pipe tobacco anyplace or any relatives otherwise that smoked a pipe at all, I still have the 2 grabows( not for any sentimental reasons, I'm just too poor or cheap to get rid of a good pipe), and a few more Grabow's since
You must log in or register to reply here.
Menu
Log in
Register